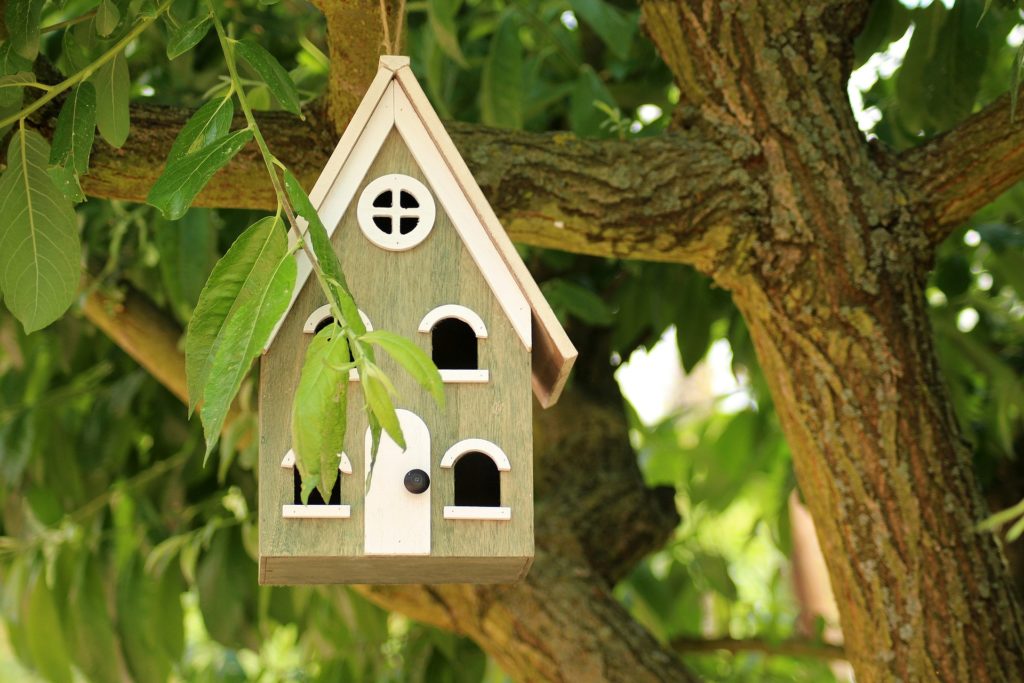 Check out the other stories at bottom of this post.

I ground my teeth together in frustration.  “…But it’s a birdhouse.”

“You’ve got to be kidding me.”

“I never kid Sir.  That would be unprofessional.”

My son (who had helped me construct the little marlin house) looked from me to the beat cop with big eyes.  I’d have to e a grown-up about the whole thing.  “Of course, officer.  I didn’t realize that our new zoning ordinance included birdhouses.”

He frowned, “Ignorance of the law is no excuse.  It is your civic duty to be aware.  You voted on the amendment in the last election.”

Honestly, I couldn’t tell you if I’d voted for or against it.  I mostly went so I could vote against the guy…well vote against one guy or another.  I kind-of closed my eyes and guessed on the rest of it.

Nevertheless, I girded up my loins and went to City Hall, expecting perhaps to joke lightly and pay some small fee for placing my new ‘building’ on my own freakin’ property.

The wait to get into City Hall was outrageous.  I was shocked at the lines when I managed to get past the metal detectors.

People were grumpily waiting in line with various forms while blank-faced civil servants told them that they were wrong in well-modulated tones.

I waited quietly though.  Several irate men were hauled away in handcuffs, so waiting quietly came a bit more naturally than it would have normally.

When I finally got to the front of the line, I gave the clerk my best ‘aw-shucks’ grin as I approached.  She looked up at me, unsmiling.

Like smiling would give me the wrong impression or worse, waste precious City resources.

“Miss, I think there must be some mistake…”

I tried again.  “The policeman who patrols around my son’s school came by this afternoon and claimed that I needed a building permit to put up this bird house.”

Her lips thinned and her eyes narrowed.  “Did you try to put up said birdhouse without a permit, sir?”

“Of course you did, you should have read the permitting ordinance in full at the time it was debated by the City Council.”  She pointed to a printed code on her desk that looked like it might topple the thing any minute.

She pulled out a large pad of paper and a calculator.  “So, we’ll start with a failure to file a permit fee, and the non-negotiable admin fee.”  She looked up at me, eyes still narrow and suspicious.  “Will the bird house in question have any plumbing?”

I felt the vein in my head start pounding.  “Lady, what part of birdhouse did you not get?”

She frowned.   “Well, you either have a fee for reviewing the plumbing and sewer ramifications of the new structure, or the non-compliance fee for not providing appropriate facilities…”

“They are birds.  They go outside.”

“Do you have any idea how much the City spends on cleaning up after pigeons who do not have the proper facilities available?”  She sniffed.  “The waste is disgusting.”

Since I wasn’t clear on whether she was upset about the money wasted or the actual waste from the birds, I let that one slide.

“Ma’am, I don’t mean to be rude, but how much is hanging the birdhouse going to cost?”

She sniffed.  “Well, I can only guess at the exact amount…”

“Give it your best guess.”

My eyes nearly popped out of my head.

“Well, those are the basic fees and don’t include your inspections, because we charge extra on blackout dates.”

“Forget it.  It was just a weekend project to build with my son.”

I swear her teeth got longer.  “You mean you’ve constructed the structure without a permit?”

“It’s a birdhouse!  I thought that was obvious since I mentioned putting it up.”

A hulking policeman in a pristine uniform slammed me against the file cabinets.

“You don’t understand!”  I was struggling, screaming…maybe frothing at the mouth.  “It’s just a birdhouse.”

He hauled me through a double set of doors, into a white room.

Which (predictably) was filled with long-toothed aliens with weird machinery who were brainwashing the town with an eye toward world domination.

Strangely enough, I have to admit this made me feel better about the whole thing for the three seconds between the realization that we were being attacked and a laser beam erasing my entire personality.

Now I work in the zoning office too.

And you need a permit.

Be sure to visit the other participates!

The Zoning Zone, by Vanessa Wells <<YOU ARE HERE

Team Building Exercise, by Samantha Bryant
Another Time, by J. Q. Rose
Suds and Scales, by Eileen Mueller
Beginning Again, by Karen Lynn
Under The Bridge, by Katharina Gerlach
Black and White, by Bill Bush
Summer Siren, by Elizabeth McCleary
The Birch Tree, by Juneta Key
Secrets, by Elizabeth Winfield