Today we are virtually traveling to Lake Waukomis, Mo. USA, to visit with author Thomas L. Hay and talk to him about the two books he has written. 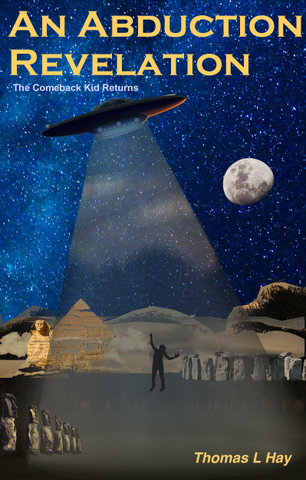 1. I see you have just recently published two books. When did you decide you wanted to write?

Most of my life I have had a desire to write a novel. Don’t really know why, just thought it would be neat. I never could find the time to fulfill my dream during my day job. After I retired, time was no longer an excuse. A subject or plot became my obstacle. To get me motivated, my wife suggested I write my memoirs. “After all,” she said, “you have had an intriguing life.” The more I thought about it the more it made sense. After all, I am the only person who knows all my memories. When I pass, they will pass with me. Writing them down would guarantee that they would last forever. Besides, my descendant’s would then have a history book to learn where they inherited their idiocy.  Behold, “The Comeback Kid, the Memoirs of Thomas L. Hay” was written and published.

2. What can you tell us about your books that are not in the blurbs?

Absolutely nothing. Because if I say anything more about them, it would be a spoiler. You know how author’s hate spoilers. On second thought, I can reveal that as a reader of my books you will feel as if we are sitting over coffee having a personnel conversation. I tell the stories in a rollicking conversational style that gets the reader directly involved in my stories.

3. What inspired your idea for the second book, “An Abduction Revelation?”

I got the plot idea from my first wife after I published my memoirs. She had claimed that we had been abducted by aliens during our brief marriage. After our divorce, she adapted an ascetic lifestyle that eventually melted the mind blocks that the aliens had supposedly implanted in her subconscious. I never really believed her, thinking she had to of had a few loose marbles, if you know what I mean. But after writing my memoirs, I got to thinking what if she was right? What if I had some mysterious phenomenon buried within my subconscious. That might make for a good story. And it certainly did! I wrote the story using a lot of my life’s actual events blended with some sci-fi fantasy’s. Almost everyone who has read “An Abduction Revelation” has given it high ratings and good reviews, not only for the writing, but for the story as well. It has lots of twists and turns and the ending is like nothing you would have ever imagined. My readers are left wondering if it is indeed reality, fiction, or my imagination gold wild. I think I have created a new genre, called “Fictional memoir.” Now how can that be, you might ask? Only one way to find out.

4. What is the hardest part (beginning, middle, or end) of a story to write? And Why?

In the case of my original memoir, the whole book. Reliving almost seventy years of my life was an invigorating whirlwind of self-enlightenment and an intense emotional journey. Not being tech minded and having no experience what so ever in writing, I started by using a big notebook pad. After about fifty pages, with arrows and notes scribbled everywhere, I had a complete mess on my hands. My lovely wife came to the rescue, “Don’t you think it would be much simpler if you joined the twentieth century Tom, and use a computer.” Reluctantly, I submitted to the idea. But then the computer and I started having issues right from the start. Lots of issues, until we finally came to the conclusion that I needed to take a class to iron them out.  I had never heard of Microsoft Word, but it turned out to be a savior. We still have our issues, but with a little help from a friend now and then, they can usually be resolved.

5. Your bio says you are retired, what do you do when you are not writing?

A little bit of this and a little bit of that. My wife is a few years younger than I, so she is still working. She asked me what I do all day long. I said, “Nothing honey.” She said, “But you said you did that yesterday too.” I said, “But honey, I hadn’t finished it yet.” When I’m not doing nothing, I golf, fish, and sing Karaoke. I like going to nursing homes and entertaining the folks with the ‘oldies but goodies’ tunes. I love beating my wife….in gin rummy and domino s. I’m a master at April Fool’s jokes and love scaring the trick or treaters on Halloween. I play a Grim Reaper stunt at ‘over the hill’ birthday parties. And I spend too much time on the computer, according to my wife.

6. Are you working on anything right now, if so, when do you expect to release it?

Yes. I’m about half way through a sequel to “An Abduction Revelation.” However, it might be awhile before I finish it, as I am spending most of my time promoting the first two books. Being a new author, I never could have imagined the work involved in marketing a book. There are around 10,000 new books published each month, so getting a reader’s attention, with so many options, is a real challenge. That is why people like yourself, are so valuable in helping readers to discover hidden treasures.

Thomas (Tommy) Hay was raised in Clinton, Mo. A 1961 Clinton Senior High graduate. He  retired from TWA/American Airlines. When he is not golfing, fishing, singing Karaoke, or writing, he enjoys spending time with family and friends. He currently resides in Lake Waukomis, Mo., with his lovely wife Karen, some hyperactive squirrels, too many irritating geese and a few cranky old catfish. 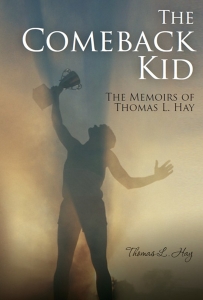 The ComeBack Kid: The Memoirs of Thomas L. Hay