“Luke Skywalker? I Thought He Was A Myth.”

This Star Wars buff was happy.  I saw VII in 3D and you should have seen the fans in costume standing in line, wandering around, so awesome.  Loved it.  I wanna dress up and play too.

I think George Lucas was blowing smoke with all his bluster about not liking the new Star Wars.  That they were making it all about the machines rather than the people–his words in an interview I watched. There is no way the creator of 4, 5, 6 could not be, at least, mildly happy with the new creation.  Me thinks, he played bad cop to Disney’s good cop to distract.  I DO NOT believe he did not like it just a bit. 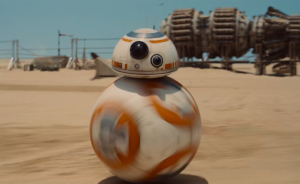 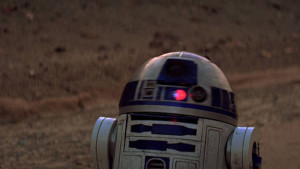 BECAUSE I did not expect to like and care about the new character so much, but I am hooked.   I even loved BB8 and I was prepared to hate him, but he won me over just like R2D2 in the day.   R2D2 has always been the iconic Star Wars to me, as much as Jedi, The Force  and Storm Troopers, when I think of it.

I felt the thrill of 1977 again, lol.  Okay I was a teen it didn’t take a lot, but I still remember the way Star Wars changed how  I felt about movies, bringing a new kind of excitement and expectation to a fun activity.  At the end of the second movie  The Empire Strikes Back,  I was so pissed at Lucas for the ending.  We (the generation) had never experienced anything like that before.

If you haven’t seen it and like Star Wars you will not be disappointed, but keep your S-foils locked for some major plot points in story. New story, but same wonderful thrill. I will be going again the first opportunity I get. 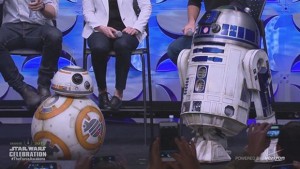 Since I am just as passionate about story telling-the writing & craft, as I am about Star Wars, I have to say the movie made good use of story craft.   The movie is another great presentation of The hero’s journey.   I could follow all the elements that Christopher Vogler talks about in his book, The Hero’s Journey: Mythic Structure for Writer’s 3rd edition, but then he did write the original email for Disney that kick started his book, when he worked there.

Vogler’s work is based on his experience and Joseph Campbell’s studies The Hero With A Thousand Faces, The Power of Myth and so on.  Campbell’s video The Hero’s Journey  is worth a watch if you love studying story craft and mythology. I’m a Campbell fan too.

I’m not the only one who found writing inspiration in the new Star Wars movie. Find out what this writer had to say about the lessons she learned.  I agree.  Very interesting points.  Lessons From The Force by Fiction Editor Beth Hill The Editors Blog

“I have a bad feeling about this.”  BUT I am doing it anyways.

A FEW THINGS I WOULD HAVE LIKED TO SEE  AND “DID SEE” THAT I LIKED  maybe some sorta Spoilers, if you are against any hint or shadow, but not really IMHO. The included quotes from The Force Awakens are the strongest hints, if you consider those spoilers, but if you watch the trailers no worse than that.

Did see— I also love the novel series Star Wars: Republic Commando, Hard Contact-Book I, by Karen Tarviss  written in later years 2004.  There are 5 books in this spin off series.  I love the fact that one of the main players in movie has connection to Storm Troopers humanizing them more like the books, also a main player in the story line.  I could write a whole post just about the Star War books, spin offs and expanded galaxy story lines, but I digress.

Did see–Harrison Ford rocked it again as Han Solo and didn’t miss a beat! The ole Solo charm & charisma has not diminished with age.   I loved seeing familiar characters and some pivotal plot points.

“I Always Hated Watching You Leave.” “That’s Why I Did It, So You’d Miss Me.”

More of–screen time for R2D2, C3PO, Leia and Luke, Jedi lightsaber fights, space battles or x-wing run attacks, speeder chases or races–Okay I do miss the Imperial Walkers too.  And where was the heavy breathing? Oh, right, he died, no more heavy breathing.  What about cutesy characters? Okay BB8 counts a little I guess.   I loved Jawas, Ewoks, Chewbecca and yes I LIKED Jar Jar Binks. Oh and even though 1, 2, 3, were different I really liked the battle droids, “Roger, roger, roger, roger”  hmm more comic relief and slap stick humor.

Did see & hear-Something I never thought I would hear from a welder of the Darkside “The Droid You Seek Is Aboard The Millennium Falcon In The Hands Of My Father, Han Solo.”

“You Still Want To Kill Me?” “That’s What Happens When You’re Being Hunted By A Stranger In A Mask.”   See all 29 quotes here

Okay I am off to watch a Star Wars movie marathon in my comfy chair.

Have you seen the new Star Wars yet?