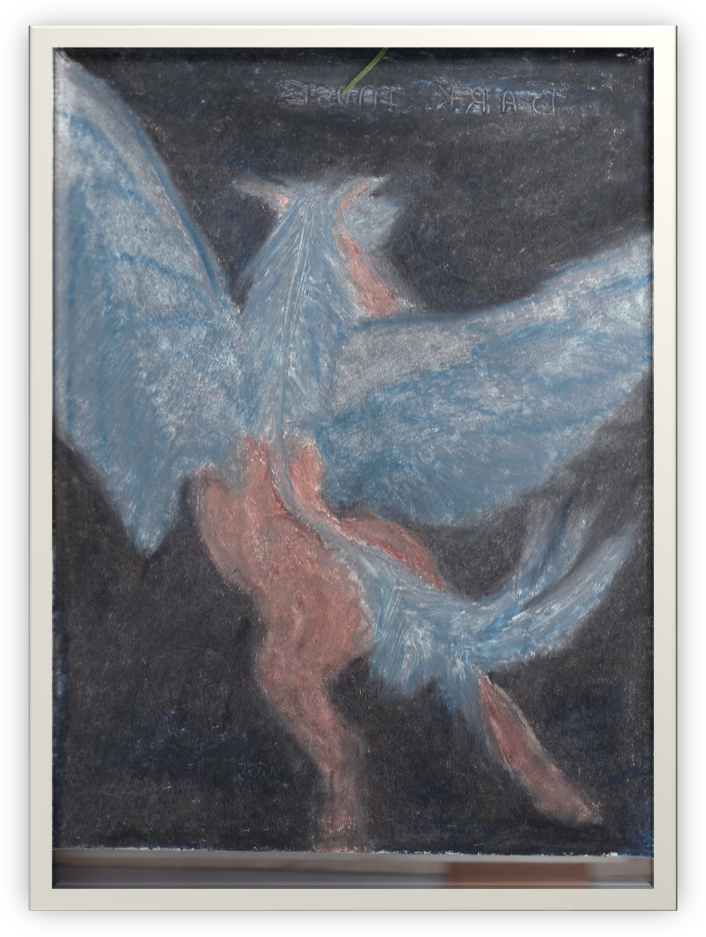 This post is a bit about my writing process and a lot about getting to know my Muse and Editor.  It is also about how my left brain is part of the problem, in that, left brain limps over right brain’s input in translation, sometimes taking the lazy route instead of working through the inconsistencies, until the ideas fit with reason and logic in the story.

~ My Dark Muse says to left brain e.g. editor, “Lefty better not call me tinker bell, or he’ll be meeting my right hoof.”

Read on and find out why that made me snicker…   Warning this might only be interesting to me, since I am talking about my own process.  It was originally written as a HTTS exercise picturing and naming the muse, which has been modified and updated several times since.

Okay, my right brain talks a lot. My left brain listens.  However, left brain doesn’t want to do the work filling in the details left open by right brain, who communicates in concepts and images.   Left brain loves puzzles, but hates the leg work when a piece doesn’t fit or is missing because it normally come fairly easy and quick for lefty, so when it don’t…  Left brain is also a horrible critic, even when half the problem is his fault.

Right Brain thinks left brain is lazy, or at least, undisciplined, despite the fact, it is strong in reason, logic, common sense and possessed with a great deal of wisdom to call upon.

The left brain loves puzzles, mysteries, thrill rides, adventure, treasure and ghost hunts, but struggles with connecting the dots. Right Brain provides the answers, but if left brain is unable to figure it out fairly quickly, he becomes crabby, critical and negative, instead of working it out.

YIN YANG OF THE BRAIN

In the Yin-Yang sense, Left brain acts in the masculine, while right brain plays the feminine.

I took a right-left brain test to see how I learn best and which side is dominant. The test results:   I am 28% visual, 24% auditory, and 18% tactile. I am right brain dominant by a small percentage.  I struggle with detail work (A-Z) for the long-term.  Right-brain characteristics & preference for learning.

I tend to look at similarities and patterns first.  I prefer drawing to hand-writing.  I understand things and have answers long before I have the path to the solution.  I tend to absorb things, rather than working them out first.  I get the whole concept, before I understand the why or how to achieve it, which is why I struggle with long-term detail work.  I have had to teach myself to work through stuff one step at time and develop stronger left-brain skills.    (Another brain test.)  19 Everyday Struggles Of Being A Right-Brained Person by Julia Pugachevsky on BuzzFeed

My writing style could best be described as “Pantser”, which fits with my right brain best.  I am learning to merge left brain thinking in a way that right and left brain function more smoothly together and help communication.

BRAIN TEST: HOW DO YOU COMMUNICATE?  WHICH SIDE IS DOMINANT?

Today, 02/14/2016 I retook both the test I have listed above.  The first said I use both my brains equally.  The second test on a scale of 1-10 said I was right-brain dominant by 2 points.  These are not the same test I took in the past, but it has been a about 10 years,since I have taken one.  I have been working on strengthening my left-brain skills and I guess I have made progress.

MENTAL EXERCISE TO SOOTH AND TRAIN THE MUSE

I have added meditation to my daily routines.   Meditation is an aid that helps improve focus and clarity of thought.  It helps ease stress and self-inflicted fears and doubt.  Meditation is not as easy as it sounds, nor as simple as “Be still and listen”.

I have also found truth in that listening to classical music helps you concentrate and learn. I like the strings and the cello.

Applying one’s self to something and sticking with it takes work.  My left brain is a bit like Garfield the cat in that it likes to creatively justify its laziness or lack of focus.

Justification is a left brain trick to get me to move on, quit, or give up, so it does not have to deal with the drudge work of connecting the dots, figuring out the details needed to make something fit or work.

Right brain works with images or the senses (e.g.  smell, taste, hearing, seeing, touch and intuition).  Right brain sometimes presents patterns or symbols, but leaves meaning unclear, or lacks connection A-Z, or the mechanics of its intent and meaning for the story.

It affects Lefty like a maze without a map or solution, so Lefty gets frustrated, pitches a fit, and can become internally critical.  He will start slapping and criticizing the whole work, or my ability, throwing out things like its not good enough, it makes no sense, or  we are just not smart enough to work it out.  That’s stupid.  Let’s do something else.  My response now to Lefty, which seems to help is “Undisciplined much?”

Lefty does not like it when the sarcasm is directed at him, which makes him grouch and right brain finds that hilarious, ah, the power of laughing at self.  (There is also that “be safe, perfect and victim thing”, as describe by Holly Lisle in HTTS course.)  No I am not crazy, I am imaginative, if you’re a writer, you probably get this.

Now back to naming the right and left brain...

So my right brain has chosen the name Captain Hook for its editor-left brain.   The reasoning behind this is because Hook is always chasing after Peter Pan, who never grows up, while never recognizing his own self-control issues.

Hook represents the structure, builder/leader, authoritative qualities of Saturn (throw in a little astrology here for those are familiar with the qualities of the planets).

Hook is jealous that Peter Pan never has to grow up.  He resents losing that care free or devil may care attitude, along with the ability to laugh at self and have fun.

Hook tells himself that Peter Pan’s life is so much easier. He never has to face the problems, pitfalls, or deal with the consequences of his choices like an adult.  Life (survival) is just a game to him.  Things come so easy for Peter Pan, too easy.

Peter Pan is not marked by time, like Hook, facing the prospect of growing older and what comes with it, to Peter chaos is a sport and he excels at creating it.

The original Hook decides someone needs to get control of that boy, and of course, that is what Hook sets about doing, or more like destroying–My Lefty is not such the self-hater as Hook, although Lefty is not above using it as an excuse to move on to something new.

EVOLUTION OF A MUSE

My Muse wanted me to post her original form as she was envisioned in 2004 the first time I assigned a physical form to her (Pegasus at top).  She chose the name Johanna at first, but as she evolved she has modified that to include other names and images for various reasons. She also told me she was a dual entity (twin in one being and the male half was named Jordan.  She is dark to his light.) She is the representation of all possibilities

My right brain refers to herself often as the Dark Muse.  She says I can also call her Raven, because she is forever the winged creature, and because she delivers messages and images.  Or, I can call her “My Pegasus”, because she carries me up and beyond imagination out into the great Ever After connecting with Spirit and the universe.

Muse refuses to be labelled or held to one image, but has agreed if I must have one, the one image to refer to that is always true is Pegasus.  It  represents the heart of who she is and the possibilities that she can become.  She says for me  to not get too comfortable with any image, as she can always change her mind.

.
Left Brain has also been labeled “The Grouch”, a Hookish quality lefty does possess, if I might say so, LOL.

Right brain pays no attention to left brain grousing, which has become an art form for him.  Despite the occasional antagonism and difficulty  in connecting, both halves of my brain are learning to work together.

I wrote the majority of this post 4 years ago.  However, the discoveries are still true about left brain vs. right brain today, which for me are continually evolving.

TRICKS I HAVE LEARNED TO COMBAT THE PANTSER AND LEFT BRAIN

We are all apprentices in a craft where no one ever becomes a master.”
—Ernest Hemingway

If you made it this far, I really enjoyed the music in this video. My Muse found it inspiring at any rate.