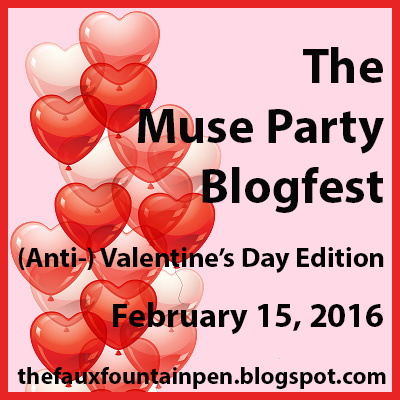 Muse Party Blogfest: Valentine Be Mine

About a character in the Starlight Galaxy.  The next post is about the series.

Don’t forget to click the links below my post and check out the rest of the party participates in this (Anti) Valentine & Valentine’s Day Blog Hop.  Thanks goes to Sarah our host for this fun event. 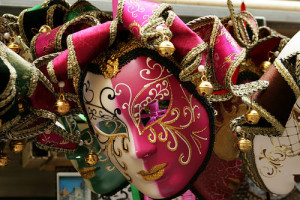 1. Who did you bring to the party? My muse and I are bringing my character from my Starlight Space Saga project, D’Anar Gillin.  My muse says that since she and I are as one, it is like having two faces, and when it comes to our date, in his world we are most like the Roman god Janus, only the feminine version, because we literally rock his world and guide his fate.

Is he/she your Valentine or anti-Valentine?  Both, in that he is my escort for this event–mine in this moment and the connection we share bringing his story to life, BUT his heart still belongs to another. 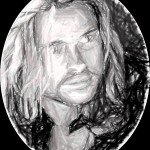 Given and drawn for me by a friend to depict this character in a role play games years ago based on info I gave her about how I viewed this character. ~Sandy

2. Which one of you is the more romantic person?  He is the most romantic, although he would deny it with stoic incredulity.  He has a beautiful mind that possesses elements of genius.   He feels much, which often translates into action.

He has a tendency to often make decisions for those he cares about or feels responsible, sometimes without asking permission.  It is done with the best of intention and generally always in their best interest, whether they know it or not, unfortunately this brings friction into his life that he possibly could have avoided, if he had just communicated first.

The irritating thing about him is that he is usually right.  He possesses a keen intuition and instincts, and he knows it. The fact he repeats this behavior is sort of funny, because his formal education and forte is in the science of communication and business.  His eight years of galactic military service took him even further specializing in information/Intel gathering, stealth technology and sub-space communications.  The people closest to him don’t think this so funny, but there is something about D’Anar that endures others to tolerance of his eccentricities.

Despite his high intelligence, and his excellent understanding of people in general, D’Anar often has a blind spot for himself and those closest to him.  He may miss signs that would be obvious to another observer.  He has been described as dense by loved ones, with good reason.

He believes in honor, despite having become so jaded about the Galaxy over time.  Honor is a natural thing to him and he finds himself doing the “right” thing, almost without thinking about it- Sometimes at high personal cost.

3. What gift are you giving to your (anti) Valentine? The gift of story and his own space ship.

4. Are you guys wearing red or pink (or black…)?   I’m wearing classic black and so is he, but I am the one in the mask.   If I were casting D’Anar, this pic would be one of my top five picks. View my google image search Here

5. Did you bring any Valentine’s Day treats?  What’s Valentine without Chocolate dipped strawberries?  (D’Anar is bringing the wine.)  And, for those who prefer a little less sweet or both, fresh strawberries and whipped cream cheese fruit dip, and for variety seedless plump white grapes with cheddar cheese wedges-mild-sharp/Colby/mozzarella.

Love-His choice All of Me (lyrics)

(Anti-)My Choice, but I could not make up my mind, so a little smooth talking southern bad boy charm Black velvet (lyrics)

My love pick, sorry had to add one more, definitely want someone who would be Good For Me

7. Got a great anti/Valentine party game?  I had no ideas, so I googled valentine couple games

8. Feeling the love or just feeling nauseous? I feel the love.  D’Anar holds a special place in my heart.  We have a long history together.  He was created in 1999-2000 originally for a Star Wars RPG that I was part of and his story has morphed and changed many times over the years (at least 7x different genre styles e.g. sci-fy, fantasy and romantic adventure), but the essences of the character has remained the same.

His original creation was inspired by the song, Your Winter by Sister Hazel, along with his love interest for those who are interested.  This song originally appeared as a movie theme song, which triggered my muse.  Movie soundtrack 10 Things I Hate About You.   How will you have fun at the party? Click dance and click, click, click some more.

9. Has your muse been a good Valentine? Mooning over D’Anar makes her happy and this has rekindled her excitement about his story, even if his heart does belong to someone else.  She’s happy, I’m happy, so yeah.

*Jordan’s Bonus Question (feel free to ignore him…): Did you bring me & Sarah a musiversary gift? (Because we’ve put up with each other for five years and I think we deserve something.)   Yes a link to a list of quotes about writing  This one hits the heart of me. I love to read, which is why I love to write story.   “The greatest part of a writer’s time is spent in reading, in order to write; a man will turn over half a library to make one book.” —Samuel Johnson

MEET MY MUSE IN VISUAL FORM

My Muse wanted me to post her original form as she was envisioned in 2004 the first time I assigned a physical form to her (Pegasus at top).  She chose the name Johanna at first, but as she evolved she has modified that to include other names and images for various reasons. She also told me she was a dual entity(twin in one being and the male half was named Jordan.  She is dark to his light.) She is the representation of all possibilities

My right brain refers to herself often as the Dark Muse.  In the beginning of 2015, she told me I can also call her Raven, because she is forever the winged creature, and because she delivers messages and images.  Or, I can call her “My Pegasus”, because she carries me up and beyond imagination out into the great Ever After connecting with Spirit and the universe.

Muse refuses to be labelled or held to one image, but has agreed if I must have one, the one image to refer to that is always true is Pegasus.  It  represents the heart of who she is and the possibilities that she can become.  She says for me  to not get too comfortable with any image, as she can always change her mind. 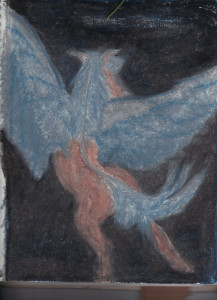