I Was Nominated For Liebster Award & I Nominate…

I’ve been nominated for the Liebster Award by Tyrean Martinson an Independent author of Christian Sci-fi Fantasy!

Tyrean’s questions for nominees and my answers:
1. Have you ever visited Washington State? No
2. Do you drink coffee or tea? Coffee and sometimes tea
3. Name your favorite Winnie-the Pooh character:   Eeyore
4. If you could travel anywhere, where would you go? European Tour,  possibly a cruise ship.
5. What’s your favorite kind of movie? My taste is eclectic.  I lean toward sci-fi, action adventure, fantasy, superhero, character driven and mythological based movies, but I do like chic flicks too, like Romancing The Stone, Sweet Home Alabama and P S I Love You.          All time faves Star Wars, Star Trek, StarGate, The Postman & Robin Hood-(Kevin Costner),  Pirates of the Caribbean, Lord of the Rings joined by Harry Potter         TV Series: StarGate: Atlantis, Highlander the series with Adrian Paul, Angel (spin off from Buffy The Vampire Slayer) and Xena.  I love all the mythological-superhero based ones they do now-a-days.
6. What song do you sing around the house/in the car? “I Wanna Be Rich” by Calloway

7. Have you ever seen a Giant Pacific Octopus in the wild or in an aquarium? No
8. What are your top three goals in life? Write fiction for a living, find Love-Peace & Happiness like Calloways songs says I guess–the rich part is relative, be the kind of person whose actions and words might inspire a quote like this:  “You give out hope like its candy in your pocket.” From The Postman–Kevin Costner movie 1997 More quotes from the Postman
9. What’s your favorite writing utensil? Computer
10. Star Wars/Star Trek or both?  Both, but Star Wars #1
11. Favorite movie soundtrack?  Soundtrack to the series Supernatural

2. In Junior High I played the lead part of the evil stepsister, in the off shoot parody comedy “Griselda” who won the Prince Pimple Hymer from her perfect sister Cinderella.

3. One of the best things I ever did was take a 2 hour jet ski tour in the Bahama’s.

5. I’ve slept in a tent on the beach next to the ocean, ate bologna sandwiches,  danced and played the beer drinking game, “Quarters”.

6. I played the clarinet in marching band in Junior High and we won the State Championship that year.

9. I believe magic is the  science we have yet to figure out.  Magic could also be use as a metaphor for the unknown.

11.  I was given a live Monarch butterfly, before it hatched from its cocoon as a present.  It was really cool to watch it emerge and then set it free. 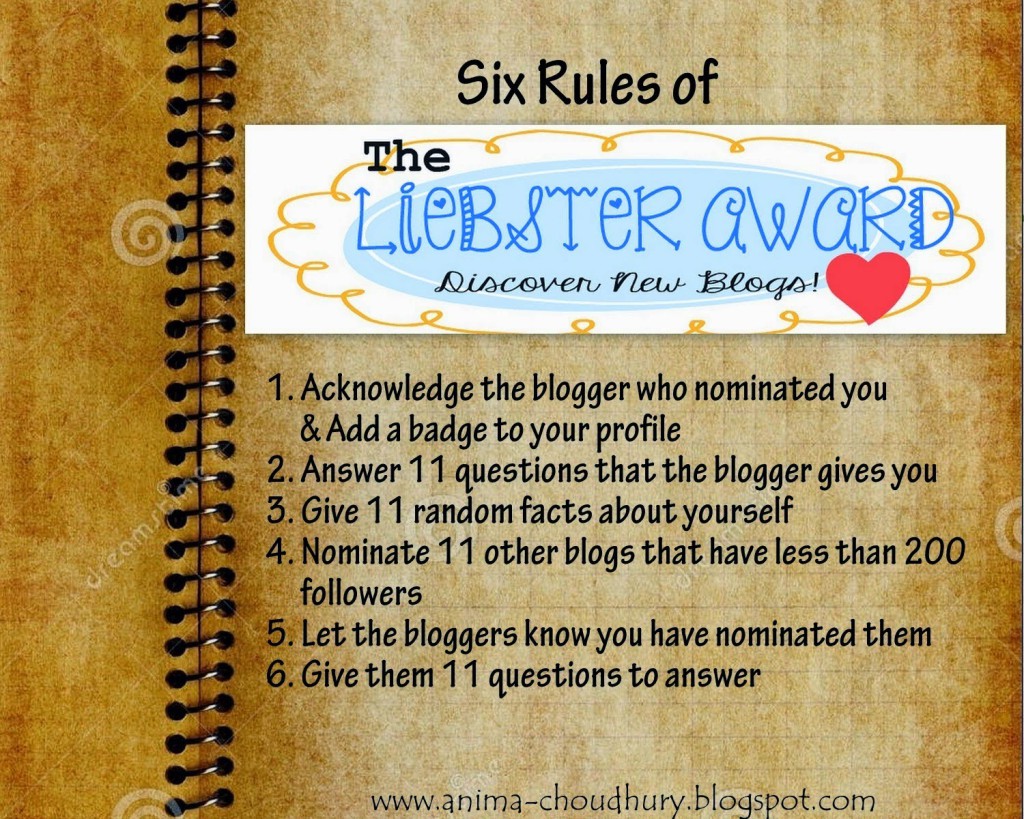 MY NOMINEES ARE… (not sure of exact number of follower, but believe each one deserves more and have something to say)
1. Kirsten AKA Lark
2. Katharina Gerlach
3. Sheri Conaway
4. Elise VanCise
5. Elena Giorgi
6. Angela Woolridge
7. Lori MacLaughin
8. Vanessa Finaughty
9. Jean Schara
10. S. K. Anthony
11. Renee Scattergood

My questions: 11 Questions for my nominees.

1. Who is your favorite author?

3. If you were given a free round trip ticket to anywhere, where would you go?

4.  Would you rather live near the ocean, forest, mountains or the fourth option;)?

5. What is your favorite genre of music?

6. Who would you throw from the Plane, Train, Automobile or Ship?

7. Where is your favorite place to escape from the daily grind to?

8. What is your best memory?  (You probably have several, but pick one)

9. Do you have a hobbit? if not, what would you like to do for a hobby? ROFL @ SELF  okay this error was too good to correct—go ahead tell me who is your favorite hobbit?

10.  What is the most memorable book you have read, or movie if not a big reader?

11. Would you travel around the world in 80 days if you could?