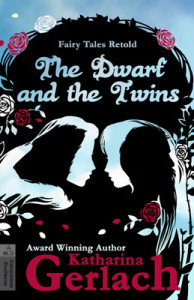 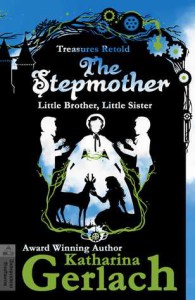 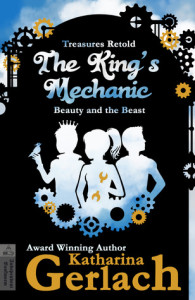 These fairy tales are all set into a world where magic is declining while steam engine technology is on the rise. Naturally, not all kingdoms are equally advanced. Thus, there are stories that resemble traditional fairy tales and others that contain many steampunk elements. I very much hope you will like the mixture.

I first met Katharina Gerlach in 2012, when I joined the “How To Think Sideways” course on the Holly Lisle websites.  She was one of the first author’s to appear on my Author Spotlights, when I first setup my website.

We have exchanged many emails, since about writing and we have even talked via Skype Chat.  She is now one of my favorite authors with a unique perspective and writing style and a mentor.  She snagged me with her vivid imagination and different take on story.  My first exposure to Katharina’s writing was an audible edition and later a kindle edition, which I read too, Hero’s Wanted, a short story anthology.

I am thrilled to welcome her back for the third time to tell us about her new series, Treasure’s Retold.  The first three releases available now via Amazon. (buying links @ bottom of post)

Now to the questions,

1. Katharina tell us why you love to read and write fairy tales?

When I started to learn how to read, fairy tales had the ideal length and the perfect subject. They filled my mind with wondrous creatures, magic, and trust of my own abilities. As I grew older, I discovered the wisdom in some of the old tales. When my Muse (the creative side of my brain) suggested writing a series of fairy tale retelling novellas, I jumped at the chance.

2. You are currently working on a series of fairy tales retold.  You have released three books so far, “The Dwarf and the Twins”, “The Stepmother”,  and “The King’s Mechanic”.   Why these stories first?

I am trying to mix the tales in a way that better known stories mix with lesser known ones (unfortunately, stories that are really well known over here can be quite unfamiliar in the US or GB as I found out). Also, there’s a gradual development of the world. The first tale is close to traditional fairy tales with a lot of magic, a curse, and a fairy godmother, but the next already contains small doses of steampunk technology. The third is fully steampunk, and the fourth will contain both elements again. I love the diversity I get with this.

3. What is your planned next release in the series?

The next story will be released on June 17th and is a retelling of “The Hut in the Forest” by the Brothers Grimm. It is my mother’s favorite fairy tale, and not very well known even in Germany. As always, the original will accompany the retelling, so readers can get to know an unfamiliar story and compare it to my twisted version.

4. You collect fairy tales, do you not? How many would you say you own?

I’m not counting them by tales or books any more, but by meters of shelf space. 😀

Currently, I still own 3 meters of books with fairy tales. However, I passed a lot of the extremely familiar tales on to my nieces and nephews already and only kept the lesser known tales.

5. What age group would you say your stories are most suited for?
Since I don’t depict gore or explicit sexual content, the stories are suitable for all ages. However, to understand some of the underlying themes, I suggest a reading age of 12/13 and up.

6. You have children, do you read your version of the fairy tales to them?

They are by now too old to want me to read to them. My middle daughter reads those stories herself, while my eldest and youngest prefer stories with horses.

7. You have a degree in Forestry, did you work as a Forest Ranger? Tell us about that and what Forest Rangers do.

My father was a forester, and I dreamed of becoming one from before I went to school (which shows how stubborn I am). After I got my degree, I realized that it would be extremely unlikely for me to get a job as a forest ranger, although I would have loved to become one. So instead, I helped to program a forest growth simulator that will help forest rangers to decide how much timber per year they can take out of a forest without harming it. Explaining the work of a German forest ranger would most likely make this post way too long, so this will be all I’m going to say on the subject for now. 😀

8. What type of adventures do you take your kids on?

We’ve done a lot. For example during the last summer holidays, we made a fantasy film about two girls who get transported to an island where only boys live – and all the boys are the same because they get cloned. It was a lot of fun even though the final film was barely half an hour long.

9. Germany is a beautiful country. Does it inspire you in your stories?

It does. Just as much as Scotland, Poland, Slovakia, America, Denmark, and all the other places I have visited. Also, I have a lot of worlds and places in my brain, but don’t worry I’m familiar with the territory there even if it’s treacherous sometimes.

10. Do you have any other writing projects, besides the fairy tales? Tell us about those.

I’m currently translating a YA historical fantasy with a strong romantic element. “Juma’s Rain” is set in a Stone Age Africa where the gods were real. It was a lot of fun to write, and translating it goes faster than I had thought would.

11. How many books have you released?

I lost count – including the short stories there have to be close to 20 titles in two languages.

12. When can we expect your next release?
In June (see above question number 3.)

AUTHOR BIO IN HER OWN WORDS:

I was born in Germany in 1968. Me and my three younger brothers grew up in the middle of a forest in the heart of the Luneburgian Heather. After romping through the forest with imagination as my guide, tomboy-me learned to read and disappeared into magical adventures, past times or eerie fairy tale woods.

I didn’t stop at reading. During my training as a landscape gardener, I wrote my first novel, a manuscript full of a beginner’s mistakes. Fortunately, I found books on Creative Writing and soon my stories improved. For a while, reality interfered with my writing but after finishing a degree in forestry and a PhD in Science, I returned to my vocation. I like to write Fantasy, Science Fiction and Historical Novels for all age groups.

At present, I am writing at my next project in a small house near Hildesheim, Germany, where I live with my husband, my three children and my dog. I’ve had various short stories published in Germany as well as a non-fiction e-book in US-Fantasy author Holly Lisle’s “The 33 Worst Mistakes Writers Make About …” series.

Those are but a few facets of my many interests.

Latest Release in Treasure Told series, a retelling of Beauty & The Beast, one of my personal favorite fairy tales of old.  I loved this, because it was a different story, and yet I could see all the elements of the old tale represented.
Available at Amazon US 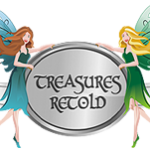 After her father is caught in the act of stealing a jeweled rose, Luna and her brother face a penalty worse than execution unless she works as the king’s mechanic. With her brother’s safety in mind, Luna does her best to please the king, trying to ignore his best friend, who is very interested in bedding her. As if these troubles weren’t enough, the king crashes a machine she considered safe to use and nearly dies. Can she keep him alive long enough to avert danger to herself, her brother, and possibly the whole kingdom?

What if Charles Perrault’s Beauty can do more than soften the heart of a beast? 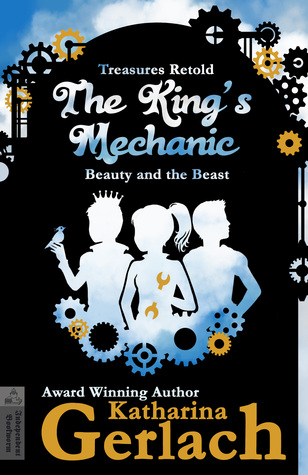 In Order of Release:

The Stepmother (Retelling of German version of Little Brother, Little Sister, A twist on the Evil Stepmother)  Available at Amazon

The King’s Mechanic (Retelling of German version of Beauty & the Beast. Bonus original fairy tale of story included in this book.) Available at Amazon

Katherina is very prolific.  Check out her other books on her 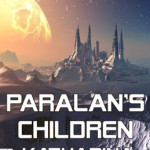 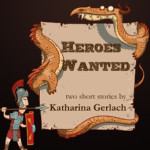 One of my favorite reads of Cat’s is a science fiction fantasy set in a frozen world.Paralan’s Children and  Hero’s Wanted, an anthology-3 short fantasy stories.