Last fall I was asked to contribute a story as part of Apocalypse Weird an epic collection of multiple, converging story lines directed by an overarching narrative created by Wonderment Media, Inc. This first-of-its-kind collaboration among two dozen authors, editors, graphic designers and marketing professionals is spearheaded by USA Today bestselling author Michael Bunker and Nick Cole, author of The Old Man and the Wasteland and Soda Pop Soldier. Nick Cole’s The Red King—the first AW novel made free to readers in Nov. 2014— introduced readers to this expansive world, and if you haven’t read it yet I highly recommend it. 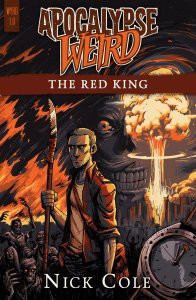 I grabbed a copy of the Red King (it’s free, BTW, and it’s really hard to put down!) and was blown away. So of course I said yes. It was a great honor to be part of such a unique event. Fast forward to now and the big launch is right around the corner: on February 23, five more books set in the Apocalypse Weird world will be released:

You should really absolutely and categorically come to the Facebook Launch Party.

Why? Because there will be prizes! And freebies! And Dr. Midnite! And you get to know the authors, awesome readers like you, and have lots of fun. All in the comfort of your home, so you can dress whatever you want. 😉

Talking about prizes …  Advance Reader Copies (ARCs) of Reversal, The Dark Knight, The Serenity Strain, and Immunity will available starting in early February and leading up to the launch. ARC readers and reviewers will be eligible for some great prizes before and at the Facebook Launch Party on February 23rd from 2:00 to 8:00 Pacific Time.

Prizes for ARC readers and reviewers will include:

Interested ARC prizewinners will also be put in a draw to receive book trailers developed by Apocalypse Weird authors Hank Garner and Kim Wells, as well as a podcast slot with Hank Garner on his popular Author Stories podcast series.

Readers will be notified of ARC availability via the Apocalypse Weird mailing list. Make sure you are signed up and don’t miss a single ARC.

The books released on February 23rd: 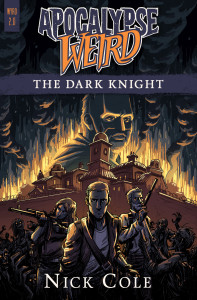 The Dark Knight by Nick Cole continues the story begun in The Red King as survivors band together to build a modern-day castle against a tide of dark forces overrunning Southern California. While Frank and Holiday struggle for power, Ash ventures into the night to rescue a lost special needs adult who has unknowingly glimpsed a horrifying future: a future where man is on the verge of extinction and a new predator rules the planet. The Apocalypse Weird is beginning, and it might just be something bigger than anyone ever imagined … or feared. 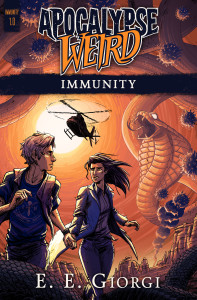 Scorched by fire and the longest drought in recorded history, survivors flee the Land of Enchantment to escape a mutated flu virus that turns ordinary people into mass-murderers. In E. E. Giorgi’s Immunity, few resilient scientists remain, gathered in one of the last national laboratories still working on a vaccine. Then the disease starts spreading within the soldiers guarding the laboratory, bloody carnage reigns. Immunologist Anu Sharma pairs up with computer geek David Ashberg to find a cure and escape the massacre. Outbreak meets World War Z in the deserts of Apocalypse Weird. 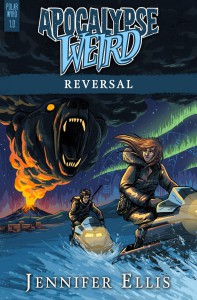 The Thing meets The Core in Jennifer Ellis’s Reversal, where the isolated International Polar Research Station on Ellesmere Island becomes an incredibly dangerous assignment for Sasha Wood. Stalked by killer polar bears, Sasha and her partner, Soren, search for their missing colleagues in the frozen tundra as their compass reveals an incredible truth: a magnetic pole reversal—fabled and feared in the scientific community for years—has occurred. The North Pole is now the South and vice versa. Psychotic scientists and giant methane-venting craters are just the beginning of a terrible and strange new reality. 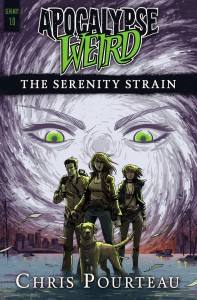 Chris Pourteau’s The Serenity Strain finds Houston, Texas, at the epicenter of an apocalypse both natural and unnatural. Three hurricanes wreak unprecedented devastation on the Texas Gulf Coast. Amidst the anarchy left in the wake of the storms, six prisoners—the genetically altered test subjects for a viral strain known as Serenity—escape the state prison in Huntsville. Their hunger for murder and destruction gorges itself on society’s survivors. One being of immense power and wanton appetites, a member of the demonic 88 named Id, arrives to oversee the destruction of mankind and morality. The Stand meets 28 Days Later in this epic tale of genetic manipulation gone awry. 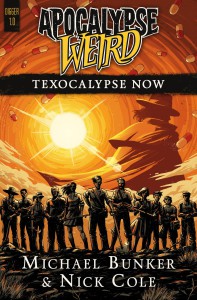 Lord of the Flies meets Mad Max in Texocalypse Now by Michael Bunker and Nick Cole. It’s a gritty tale of survival set in the post-Apocalyptic West Texas Badlands. Packs of feral, cannibalistic humans called “hordes” and other psychotic groups threaten a band of children led by Ellis, a boy barely a man. Ellis and the children make a home for themselves in a hidden valley atop a mysterious mesa. But when a member of the 88, a Man in Black simply known as Mayhem, arrives in the Badlands, Ellis and his small “family” of orphans are forced underground to survive.