**I changed my WordPress theme in 2018 redoing my website, so I am still transferring post from the old site to here. This is Storytime Blog Hop April 27th, 2016 (6 Stories from authors around the world, starting with my contribution, Instinct.)

Welcome to another chapter in Storytime Blog Hop.  We have 6 new short speculative fiction tales from authors around the world.  My contribution below.  Be sure and check out the links below to read the other authors in the hop.  Leave us comments.  We love hearing from you.

It felt like years since the earth yawned open swallowing his mother whole. Horror had paralyzed him until instinct kicked in.   He had traveled many miles since then or at least it felt like it.

He managed to push thoughts of his mother aside in a single-minded focus that set a grueling pace with little rest.  Strung along by an intuitive force that lessened as he near the coastline.  He kept moving until hunger drove him to steal food, or someone handed it to him.

Kaylyn sniffed the air tagging the smells; salt, sea, flora and fauna, old dust and wet dirt hung in the air.  His senses felt sharper more accurate.  He knew from the smells that he needed to find shelter soon or get caught in heavy rain.

On the edge of the forest where an open field housed a huge sign he read, Welcome to Moon Hollow.   Just Another Port in the Storm.

Next to the paved road, he could see a single building with a surrounding tree line that appeared to spill from its roof.  It’s stained glass mosaic window, still intact, said Blue Orchid Café.

The gnawing pain in his middle had faded; however; he knew he needed to find food more than shelter.

The sound of an approaching vehicle settled his internal debate as he leaped out into the open.  He crossed the field before the vehicle could round the corner sheltering in the shadow of the building to remain hidden.

Seconds later, he watched a man and teenage girl exit a black sedan.   The jangle of bells cued him that the front door opened.  He angled through the narrow gap before it shut.

Kaylan ducked behind a tree growing through the inside floor. The trees appendages weaved in and out of the walls, which was odd, but he didn’t have time to ponder it, so much had changed that he did not understand since the world shook apart.

“Whose asking?” The man eyed the duo from behind a bar.

“Nathan Lovett.  I’m a solicitor with Bingaman and Beckmann Law Associates.”  A pudgy tanned hand laid a small card on the bar along with a legal sized document.

The solicitor pointed to the girl.  “Your half-sister, Ava Jacks.”

“I don’t have a half-sister,” Simon said.

“You do.” This time, he pointed to the document still on the bar.  “And, you have been awarded custody.”

Kaylan shifted to get a better look at the girl.  Pretty, but not too girly.   She had shoved her auburn hair into a ball cap.  Little bits hung out.  The baseball jersey she wore looked dingy, with a faded number 3 on back.

He thought she stood unusually still.   Her stance was defiant like fate had not been kind to her either.   He guessed her about 13.

“Absolutely not!  Where’s the kid’s parents?”

“Gone!” Ava said twisting toward the door.  Her tone was flat, but Kaylan heard the anger and grief underneath.  It made him bristle.

The solicitor caught the girl’s arm, “No. You. Don’t.”

Kaylan’s world coalesced into one pivotal moment in the past, his mother. He leaped forward in a crouch yelling, “Let her go!”

A deep growl and then bark sounded really close.  Where was the dog?

The man called Simon came out from behind the bar.  “Get that wolf-pup out of my business.”

Did he mean me?  Kaylan eyeballed Simon in alarm, backpedaling.  He glanced down at his hands; seeing paws covered in snowy fur.  The world wasn’t just different and crazy; HE was different.

He squeezed his eyes shut.  Maybe he’d wake up in his bed discovering all this had been a nightmare.

The sound of a swinging door distracted everyone.  A giant man wearing an apron stood at the back of the room.

Kaylan didn’t ask permission.  He hit the swinging door at full speed, only to find himself cornered a few seconds later as he slid into a wall.

The girl threw herself in front of him. “Leave him alone.  He’s just a puppy.”

Nettled by the description.  Irritation replaced panic.  Tingling engulfed him.  He felt himself stretching out of his body and into the universe, except he wasn’t doing anything. 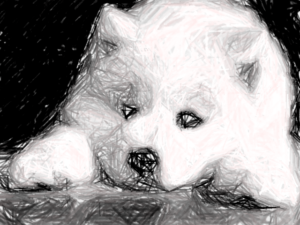