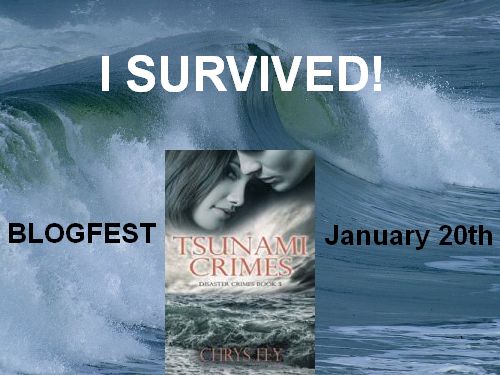 “This is Chrys Fey reporting for Disaster 5 News. I am in Hawaii on the big island where a tsunami hit yesterday morning. I have Juneta Key a tourist who was on vacation here at the time with me, a survivor of the tsunami. Juneta, can you tell our viewers what happened, and how you survived?“

[“It was a beautiful day. Sunny. Warm. The water calm, and then it just receded, but before that…

The warnings came in. The hotel staff scrambled starting evacuation preparations telling us that routes out and transportation were limited. One purse or a small case was all you were allowed to take with you. Something you can easily carry or sit in your lap.

The luxury resort was remote. I ended up on the last land rover out. We were a parade bumper to bumper all going the same direction. The road was rural, snake-like and narrow and steep. Signs were posted at entry stations top and bottom of the mountain with radio communications between the two points because there was no room for two-way vehicle traffic.

Vehicles were packed, staff and tourists. The sweet smell of hibiscus-laced the air. I could hear the roar of waterfalls in the distance, but not animals. Hardly any bird sounds, still, it was hard to believe that devastation was about to strike.

Half way up, the bus, two cars in front of us sputtered and died. There was no going around it on the narrow windy road. The vehicles ahead of us didn’t stop. We heard booms in the distance.

Everyone got out and started walking. A sense of urgency permeated the air. In silent agreement, we all picked up the pace. We were ants on a hill, mountain wall on one side and a free fall on the other.

I have no words to describe the sound of the tsunami or the feelings of surreal horror that surrounded us all. It happened fast. We were climbing one moment than tumbling in churning gritty black water slamming into hard objects. There was no up or down. The world had ended.

Honestly, I’m not sure why I’m not dead or how it happened, but I found myself floating on a partial rooftop. Alone. The monster waters propelled me up and forward while devouring those I traveled with. I gripped the rooftop and prayed, convinced it was the ride of death.

Giant trees, partial houses, vehicles, a plane wing, and bodies spilled and rolled around me, yet my makeshift boat surged and dipped miraculously staying upright until it pushed me out out to sea losing momentum. The wild ride was over, except for the natural rocking of the water.

I was surrounded by debris as far as the eye could see, but no landmass in sight. I probably could have walked on it, but there was nowhere to go except into the ocean.

Hours passed.  I watched the sun set pretending it was just another day in paradise.   I couldn’t stop shivering as the temperature dropped.   Night settled.

The canopy of the star dotted sky felt massive.  In the cathedral of nature, I was insignificant yet it was incredible that I was still here.  I wondered if sharks could get through the debris enough to pose a threat.

Then I heard it.

At first, I thought I was imagining it.   The night was black under the stars and visibility low to the naked eye.  I squinted at the stars straining to see.  One star was growing bigger moving steadily toward me.

It was a helicopter.

I stood waving my arms. Water surged over the side.  I sat.  I didn’t want to sink just as I was being rescued.  What if they didn’t see me?  I held my hand in front of my face and wiggled my fingers.  It was that dark but I could see the movement and shape.  The action calmed me.

Funny, I didn’t really notice the pain in my body until my feet touched land again.  My head ached.  I could feel the congealed blood in my hair, but I was walking and breathing.

I was one of the lucky ones, at least, that is what everyone keeps telling me, so few that walked with me have been found.  I know I should feel happy to have survived, but I can’t stop thinking, why me?”]

NOTE:   The idea of the way survived came from this true life story.  My survival story, of course, total fiction.
FUN LINKS:
ULTIMATE BUG OUT BAG: THE BOB GUIDE FOR YOUR SURVIVAL
EFFECTS OF A TSUNAMI

Title: Tsunami Crimes
Series: Disaster Crimes #3
Author: Chrys Fey
Genre: Romantic-Suspense
Page Count: 272
BLURB: Beth and Donovan have come a long way from Hurricane
Sabrina and the San Francisco earthquake. Now they are approaching their
wedding day and anxiously waiting to promise each other a lifetime of love. The
journey down the aisle isn’t smooth, though, as they receive threats from the
followers of the notorious criminal, Jackson Storm. They think they’ll be safe
in Hawaii, but distance can’t stop these killers. Not even a tsunami can.
This monstrous wave is the most devastating disaster Beth
has ever faced. It leaves her beaten, frightened. Is she a widow on her
honeymoon? As she struggles to hold herself together and find Donovan, she’s
kidnapped by Jackson’s men.
Fearing her dead, Donovan searches the rubble and shelters
with no luck. The thought of her being swept out to sea is almost too much for
him to bear, but the reality is much worse. She’s being used as bait to get him
to fall into a deadly trap.
If they live through this disaster, they may never be the
same again.
DIGITAL LINKS:
Amazon US / Amazon UK / Amazon CA
Nook / Kobo / The Wild Rose Press
PRINT LINK:
The Wild Rose Press

Chrys Fey is the author of Hurricane Crimes, Book One in the Disaster Crimes series, as well as these releases from The Wild Rose Press: 30 Seconds, Ghost of Death, and Witch of Death. She is an administrator for the Insecure Writer’s Support Group and has participated in the Blogging from April A to Z Challenge.

When Fey was six years old, she realized she wanted to be a writer by watching her mother pursue publication. At the age of twelve, she started writing her first novel, which flourished into a series she later rewrote at seventeen.

VIST THE OTHER PARTICIPATES.  READ MORE SURVIVOR STORIES AT THE LINKS BELOW.