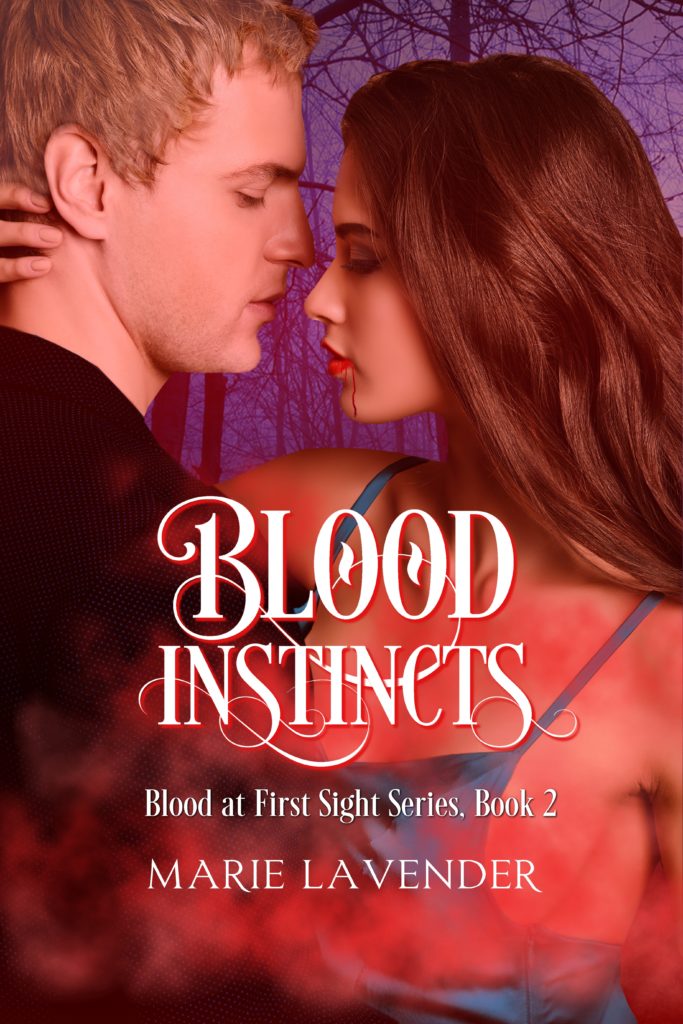 Tagline:  What if you found out that you weren’t exactly…human?

Blurb: Enter the Other World at your own risk…

What if you found out that you weren’t exactly…human?

Myah Sullivan is suddenly living that nightmare. There are Others in the world, dangerous, supernatural creatures that make her mind spin and cause her to question the reality she’s always known.

Oliver King is her savior, a vampire who tries to show her the way. Through her journey, she learns far more than she ever thought she would about herself, and about the past. Soon, she discovers that there is so much more to meeting Oliver than mere happenstance.

Can Myah accept her new reality, or will she retreat into that normal, safe world she once thought was her own?

Blood Instincts came from the idea that we may not always know everything about ourselves. This story involves a woman who finds out she isn’t just human.

Can’t I love them both? I adore Oliver, the gentleman and vampire hero of Blood Instincts. But I also admire Myah. Her tale is so genuine. Of course she’s scared at first, but she really comes into her own.

My favorite part was imagining myself in each role. How might I react to the events in the story? A big portion of writing a paranormal tale is using your imagination.

Of course, I needed to learn about Baltimore all over again. But beyond that, I found a great forested area in the Adirondacks, a place that plays a major role in Oliver and Myah’s story. For the rest, I relied on facts from the previous book in the series, and the remainder came from the elusive muse.

What if you found out that you weren’t exactly…human? Oliver discovers a human who is not yet aware of her powers. However, Myah’s not so sure this attractive stranger is right, and she isn’t certain she’s ready to embark on such a journey…

The final book in the trilogy is called The Bloodseer Legacy. It is a dystopian paranormal romance, but I am not yet finished writing it.

I hope you get a chance to check out Myah and Oliver’s tale! You won’t regret it!

Multi-genre author of Victorian romance, UPON YOUR RETURN, and 23 other books. UPON YOUR LOVE and THE MISSING PIECE placed in the TOP 10 on the 2017 P&E Readers’ Poll. DIRECTIONS OF THE HEART was nominated for the 2017 Reader’s Choice Awards. The I Love Romance Blog became a finalist in StartDating DK’s Romance Blog Awards of 2017. ILRB landed on Feedspot’s 2017 TOP 100 Novel Blogs and TOP 100 Romance Blogs. DIRECTIONS OF THE HEART placed in the TOP 10 Books of 2017 on Amy’s Bookshelf Reviews blog. TOP 20 Authors of 2017 on Amy’s Bookshelf Reviews blog. Mystery Blogger Award for 2017. A to Z Blog Challenge Survivor in 2016. March 2016 Empress of the Universe title – winner of the “Broken Heart” themed contest and the “I Love You” themed contest on Poetry Universe. SECOND CHANCE HEART and A LITTLE MAGICK placed in the TOP 10 on the 2015 P&E Readers’ Poll. Nominated in the TRR Readers’ Choice Awards for Winter 2015. Poetry winner of the 2015 PnPAuthors Contest. The Versatile Blogger Award for 2015. Honorable Mention in the 2014 BTS Red Carpet Book Awards. Finalist and Runner-up in the 2014 MARSocial’s Author of the Year Competition. Honorable mention in the January 2014 Reader’s Choice Award. Liebster Blogger Award for 2013, 2014 and 2016. 2013 and 2014 Amazon Bestseller Ranking for UPON YOUR RETURN. Top 10 Authors on AuthorsDB.com. Winner of the Great One Liners Contest on the Directory of Published Authors.

Marie Lavender lives in the Midwest with her family and three cats. She has been writing for a little over twenty-five years. She has more works in progress than she can count on two hands. Since 2010, Marie has published 24 books in the genres of historical romance, contemporary romance, romantic suspense, paranormal romance, dramatic fiction, fantasy, science fiction, mystery/thriller, literary fiction and poetry. She has also contributed to several anthologies. Her current published series are The Heiresses in Love Series, The Eternal Hearts Series, The Magick Series, The Code of Endhivar Series and The Blood at First Sight Series.